Washington DC on June 6th @noon: Rally Against the 4th Anniversary of the 2nd Genocide in Sudan (Nuba Mountains/South Kordofan) 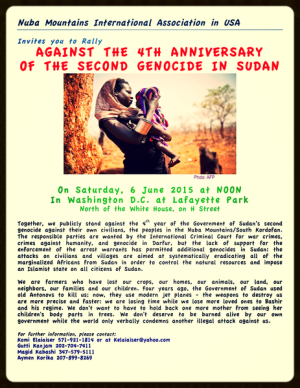 The Nuba Mountains International Association in USA is calling upon all Sudanese civil society organizations, movements, political parties, activists, peace supporters, and Non-Sudanese friends to attend and participate in the grand rally on Saturday, June 6, 2015, in Washington, D.C at noon. Together, we publicly stand against the fourth year of the Government of Sudan’s second genocide against their own civilians, the peoples in the Nuba Mountains, South Kordofan.

The responsible parties, the Sudanese President Omar Hassan Ahmed al-Bashir, who is wanted by the International Criminal Court for war crimes, crimes against humanity, and genocide in the situation of Darfur, members of the National Congress Party (NCP), formerly known as the National Islamic Front (NIF), and the Sudanese military forces, are radical extremists who support a terrorist regime aimed at systematically eradicating all of the marginalized Africans from Sudan in order to control the natural resources and impose an Islamist state on all citizens of Sudan.

This military junta which gained control by military coup has ruled us for over 26 years: for over a decade Bashir and his regime have committed genocide against the peoples in Darfur while the world talked about his crimes, but did nothing to enforce the ICC arrest warrants and therefore, gave the Government of Sudan the permission to commit further genocides in Sudan, against us in the Nuba Mountains and against the peoples in the Blue Nile state. Weapons used against us include long range missiles, cluster bombs and bullets; starvation, rape, the destruction of our homes, villages, hospitals, schools, and markets force us into caves and to be refugees in neighboring countries because we, the indigenous civilians of South Kordofan, are being compelled to leave our motherland.

We are farmers that have lost our crops, our homes, our animals, our land, our neighbors, our families and our most valuable treasure, our children. Four years ago, the Government of Sudan used old Antonovs to kill us, now they use modern jet planes - the weapons to destroy us are more precise and faster: we are losing time while we lose more loved ones to Bashir and his regime. We don't want to have to hold back one more mother from seeing her children's body parts in trees. We don't deserve to be burned alive by our own government while the world watches and verbally condemns another attack.

Please join us as we urge the U.S. Government and the states parties of their responsibility to protect civilians being killed by their government. The Government of Sudan committed the first genocide of the 21st century and the longest genocide in 100 years and they will not stop committing this illegal action against us. In order for the Nuba peoples to survive, we need the international community to intervene and finally, end all acts of genocide.

June 6th: join us in #DC as we stand against #Bashir & #NCP for killing civilians in #Nuba for 4yrs #genocide @greta pic.twitter.com/206XIvX2dr

Can you define genocide? Do you know that it is happening today? Watch the video for a better understanding:

If you would like more time to read the banners, click here for the photos (Courtesy of Pippitolstoy).

According to the Rome Statute of the International Criminal Court, Article 6: Genocide:

For the purpose of this Statute, "genocide" means any of the following acts committed with intent to destroy, in whole or in part, a national, ethnical, racial or religious group, as such:

(b)     Causing serious bodily or mental harm to members of the group;

(c)     Deliberately inflicting on the group conditions of life calculated to bring about its physical destruction in whole or in part;

(d)     Imposing measures intended to prevent births within the group;

(e)     Forcibly transferring children of the group to another group. ﻿ 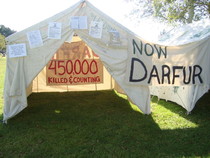 According to the UN Darfur Timeline,

In March 2003, fighting breaks out in the Darfur region of western Sudan between Government forces and rebels from the Sudan Liberation Army (SLA) and the Justice and Equality Movement (JEM).﻿

Later that year in September, over 500,000 refugees in Darfur need humanitarian assistance and there is an agreement for a ceasefire, but the fighting doesn't end. Bashir begins his systematic "scorched-earth" ﻿genocidal campaign, coordinating members of his regime, the Sudanese Armed Forces, the Sudanese Police Force, the National Intelligence and Security Service and the Humanitarian Aid Commission to commit acts of genocide, crimes against humanity and war crimes.

By early December the allied Arab Janjaweed militia targets black African civilians and commits acts of torture, rape, extermination and murder. Further, the Janjaweed commit acts of forcible transfer by burning towns and villages and contaminating wells and water pumps while the Government of Sudan hindered humanitarian access to Darfur.

BBC News updated their timeline for events in Sudan. Last updated on 7 October 2012.﻿

On 22 October 2012, Eric Reeves, Ph.D., an author and professor of English Language and Literacy at Smith College, released his E-Book “Compromising With Evil: An Archival History of Greater Sudan, 2007-2012.” For an extensive look at what happened since the signing of  the Comprehensive Peace Agreement in January 2005﻿, check out this free resource.

Why is it Important to Arrest Bashir?

Because Darfur is still happening...

President Omar Hassan Al Bashir is the only sitting head of state indicted for war crimes, crimes against humanity and genocide by the International Criminal Court.

Can you imagine if we were able to arrest Hitler while he was implementing his genocidal campaign? 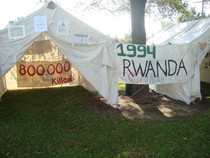 Genocide is preventable. The machetes used to slaughter 800,000 human beings in Rwanda were imported two years before the crimes were committed. It took only 100 days to kill them while the world ignored their cries for help.﻿

On April 30, 1994, the U.N. Security Council spent eight hours discussing the Rwandan crisis. The resolution condemned the killings, but omitted the word "genocide." Proper authority was not given, actions were not taken, more people were brutally raped, tortured, mutilated, and murdered. As reported by Frontline, the world did nothing which resulted in The Triumph of Evil. Had the term been used, the U.N. would have been legally obligated to "prevent and punish" the perpetrators.

If you want to better understand the timeline of what happened in Rwanda, please see PBS' Historical Chronology.﻿﻿

The Human Rights Watch published a report, Tolerating Genocide, in March 1999 and stated, "The Rwandans who organized and executed the genocide must bear full responsibility for it. But genocide anywhere implicates everyone. To the extent that governments and peoples elsewhere failed to prevent and halt this killing campaign, they all share in the shame of the crime."

As the Czech representative declared at one point, "Rwanda is not a priority for the Czech government, but as a human being I can not sit here and do nothing."

Leave None to Tell the Story: Genocide in Rwanda - HRW﻿﻿

Moral Impulse: Rebel With A Cause

When will genocide matter? Does it have to be at our front door or happen to our families before we care enough to do something? That’s my tough question. I used to believe that if the Holocaust happened today, there would have been such a tumultuous uproar that we would have stopped it before six million people were collected and murdered within a span of six years. Today, I’m not so sure. Click here for some inspiration.﻿﻿﻿